Nikel — The City as a Material

An interview with Tatjana Gorbachewskaja

Tatjana Gorbachewskaja is an architect who grew up in the Russian town Nikel, located in the far North near the Russian border with Norway. For Dark Ecology Project she researched the materials of her hometown together with Katya Larina, resulting in Nikel Materiality, which consists of a small publication, a presentation and guided walk through Nikel. 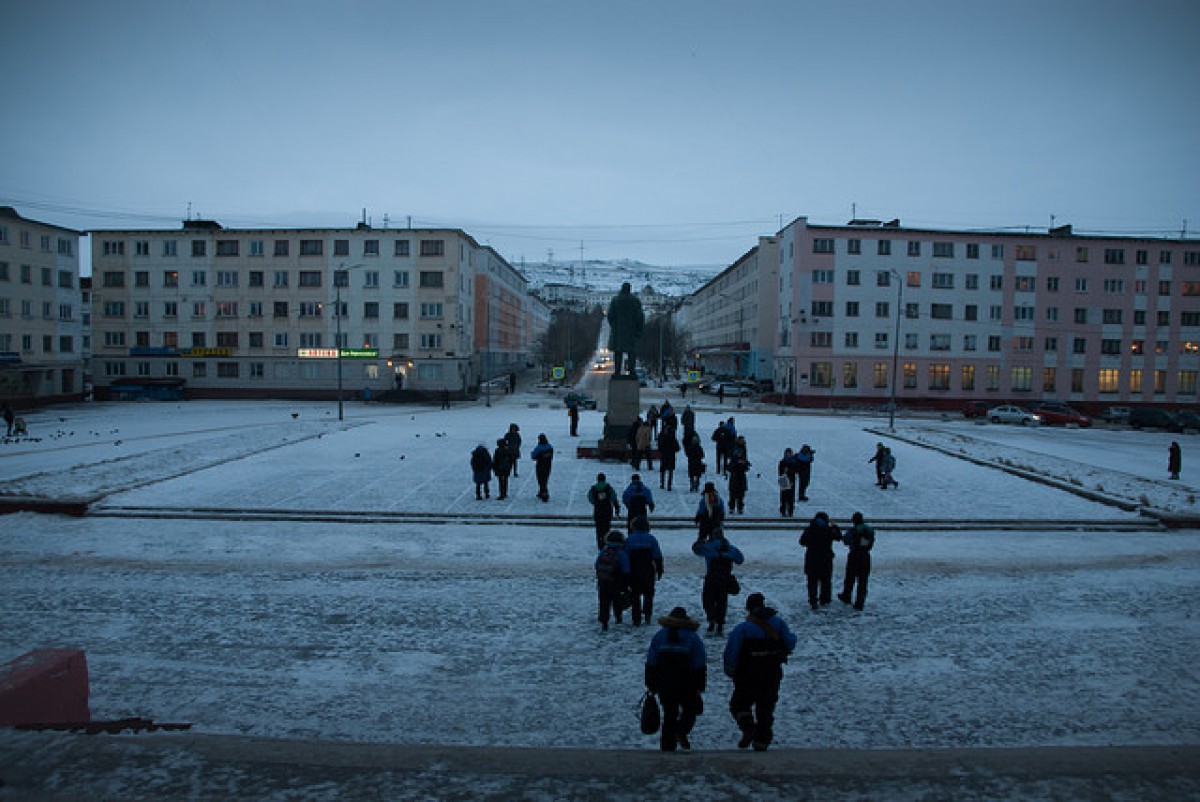 How did you start researching Nikel?

Katya Larina (KL) / My interests come from two sides. One is the research I did for my studies in Landscape Urbanism at the Architectural Association in London, which is about understanding the city as a complex interconnected ecology. The other is my practical experience as an advisor and expert on strategies for industrial cities, closed cities, mining cities, or cities with heavy industry in Siberia. In the research into Nikel I managed to combine both interests.

Tatjana Gorbachewskaja (TG) / My curiosity stems from my background: Nikel is my hometown. I also teach at the University of Art and Design in Offenbach, where we investigate various experimental design methodologies relating to the topic of ‘new materiality’. In August 2015 I returned from a research residency in Nikel with a huge collection of material samples. Then Katya and I realised that the material phenomena and artefacts from Nikel could be structured using certain motifs relating to the idea of an ecological material system.

Nikel has a dynamic political history. Can you connect the dots for us?

TG / The town emerged solely because of the nickel smelter. It’s a young settlement, established around 1935. From the beginning, the town was a centre of advanced and innovative industrial production. American technologies were used for the construction of a chimney—apparently the tallest one in Europe at that time. Only Canadians had the construction technologies suitable for Arctic climatic conditions, so all the smelting plants projects were developed in Canada. The general plan was designed by Finnish architects and further developed by Soviet urban planners after the Second World War. The mining technology was the most advanced for its time. Life in Nikel was highly subsidised and therefore quite appealing to the residents. Nikel was built in an area of extreme living conditions. It materialised as an artificial organism covered by a top-down ‘protective dome’ of vital infrastructure provided by one supplier—the state. Nikel and the region have been maintained by the state for many years, but after 1991, due to more volatile economic and political circumstances, the town was left without central control. As a result the artificial ecology of the city collapsed, and had to adapt to survive.

KL / I’ve worked with several Soviet industrial cities. They typically have separate districts which reflect different political epochs of Soviet and post-Soviet times. You can have a very distinguished Stalin or Khrushchev town. They are characterised by completely different ideologies and aesthetics. But Nikel, with its special Arctic weather conditions, is structured more rationally. At the same time, in Nikel, one epoch is resisting another one. The architectures use more varied resources and interact with each other. It’s more about respecting what has been done, learning from others. In Nikel the epochs all exist simultaneously.

TG / That is really rare for a Soviet city. For example, the first eight Finnish buildings in Nikel were integrated into the Soviet Promenade Axis. That’s why they’re still in good condition. Other early buildings were destroyed because they weren’t fully integrated. Not being integrated means dying off.

You are working within a framework of ‘new materiality’. Can you elaborate on the methodology and how you applied it to Nikel?

TG / New Materialism is about rethinking relationships between object and subject, people and nature; moving from a focus on the human experience of things to things themselves. New Materialism is about acknowledging nonhuman forces in events. Important theorists in this field are, for instance, Jane Bennett, Manuel DeLanda and Graham Harman. In the case of Nikel, the methods of New Materialism help us to trace non-material social processes and transformations through the material agency. Technology and material fabrication can reveal very specific aspects in this context. We have explored different logics of material assemblies of the town’s construction in different political epochs. Each epoch reveals its own sensibility to the fabrication of a material. The sources of energy used for construction also changed over the decades, depending on whether the town’s relationships were externally regulated or self-sustaining. Through this perspective every piece of the town’s construction can explain a lot on many different levels of interrelations.

KL / The name of the city itself already suggests this. Nikel as a real material and a symbolic notion penetrates all levels of the existence of this settlement, manifesting the evolution of the artificial ecology the town has created. ‘Nickel’ as a non‐physical entity provided an artificial immunity to the city in the form of high subsidies and pensions, twice the holiday time, earlier retirement, and good facilities for sports and education. The products of nickel have become unpredictable. We started looking into the variety of materials that make up the city on a micro level and expanded its qualities to social, economic and environmental processes on a large scale. For instance, an exciting part of the research was to trace a representation of larger processes, which were shaping the city in one material, such as the slag, a by-product of the nickel ore smelting. The pressure from the artificial and natural environment gave this material many shapes and forms: it became a building material, an agent of damage, it is also present as a component of the natural ecosystem. It has penetrated into the surfaces of the buildings and accumulated in cracks and dark corners. This dust mixed with the brightly painted surfaces in the city creates a specific texture typical of most of the buildings in Nikel.

So we could see this city as a living system?

KL / Nikel was initially set up as a very artificial system, controlled top down by the state. But in time it started behaving and expressing itself as a real living organism. All of its components, including the materials from which it is built, are changing and evolving to adapt to the transforming conditions. All materials behave dynamically in Nikel. They degrade faster than elsewhere. Nature is quite aggressive. It’s all about the energy the city shares with nature and for which it competes with nature.

TG This city is slowly opening up to its environment. And this process is a self-organising process. No one controls it!

What about the pollution from the smelter?

TG / The main ecological damage happened in the 1980s, when the company started smelting a non-local material, the nickel ore imported from Norilsk (the mining city further to the East in Russia), with a high concentration of sulphur dioxide. It killed almost all the vegetation around the town within just a couple of years. Another cause of major damage was the collapse of the Soviet Union in the 1990s. That had an even worse impact on Nikel. The city lost its source of social security and its future perspective. People started leaving the city. It’s still possible to trace the scars of these processes in the material tissue of Nikel. It’s a city fighting to survive. Nature is slowly recovering because the company now mostly processes local ore. The city is also starting to take on its proper size. So it is stabilising. Let’s hope!

You said in your lecture in Nikel during the second Dark Ecology Journey that one of the most interesting parts of your research was the perception of the city as an infrastructural element. Could you elaborate on that?

TG / In the Arctic, the most important thing is the artificial energy network. Nikel’s energy infrastructure requires very high maintenance; it is a high resource-consuming component of the city. For example, in Soviet times, buildings were regularly painted in bright colours so that the residents did not suffer from colour starvation. Now, because of the low maintenance financing and the harsh climatic conditions, all the layers of paint on the façades have cracked to expose the surface beneath them. Also, heating pipes are not underground in Nikel, they are built above the ground because of the permafrost. It’s like an exposed artificial organism. You see the flow, the veins. That’s how we set up our map of Nikel—we tried to show the infrastructure veins of the city.

You made a very elaborate and different map of the city, with several interesting structural elements. What was the framework you used for mapping?

TG / The original idea was to create an alternative map of the city. Instead of mapping the classical city’s highlights, we tried to map a material agency representing the power of the city. We took material artefacts as witnesses that are able to describe the history of natural, political and social processes of the settlement. The artefacts we found were extraordinary and very expressive. Through the map and catalogue of the artefacts we present Nikel as a ‘material system’, as a multi- scalar expression of new materials that appeared and evolved while embedded in the town’s fabric. We organised the artefacts into four sections.

KL / As said, the material entity of Nikel has been shaped by successive ideological paradigms of the Soviet and the Post-Soviet political context. In the first group (Historical Clash) we presented artefacts and materials related to the history of social and political rhythms which structured the physical territories of the town. The second group (Energy Infrastructure) is related to the organisational concept of the ecosystem which is a function representing a ‘flow of energy and materials’. Here, we perceive Nikel as an infrastructural element for the resource-development industry, a life- support mechanism of a large industrial machine. In the third group of materials (Self-Organising Boundaries) we draw the boundaries of ‘competing patterns of existing ecosystems’. This part of the research reveals the fragmented character of the city and traces boundaries and borders that evolved naturally in the town as a response to the overlay and resistance of different elements of Nikel’s artificial ecology. In the last group (The Slag), we consider a physical representation of a new material that has appeared in Nikel, copper-nickel dust. For this section we created a wind simulation map, which helped us to understand how the environmental forces spread slag and pollution through the city. It shows how the urban tissue reacts to it.

Did you present your insights about Nikel to locals?

KL / Yes, we had a presentation in Nikel for the local people. For us, the process of the environmental degradation indicates an evolutionary process of the city’s artificial system, revealing its qualities. For inhabitants, it’s mostly a personal tragedy. We were worried that we would be misunderstood, but surprisingly, we had quite a positive response.

TG / A teacher from the art school pointed out one more important energy resource in Nikel, another important resource of Nikel materiality: the people. And that is true: they really are the driving force of the city.

This interview has also been published as part of Living Earth – Field Notes from Dark Ecology Project 2014 – 2016. The publication is available at www.sonicacts.com/shop.